I was talking to a guy who had read the bit about how colour might be seen underwater compared to how it was seen out of the water. He gave me the impression that he thought I didn’t think flouro baits were any good. That is definitely not what is in the article. I have merely pointed out what happens to light in coloured water.

Now while I don’t use them, nowhere have I said that flouros don’t catch fish or are no good. There do not seem to be any studies on the subject with respect to carp to draw any hard and fast conclusions. Now I am pretty sure that the colour of a lure may make a difference in catching pike or perch or large mouthed bass. However, their vision system is slightly different to that of a carp and they also rely on other senses to detect the presence of prey fish.  The book “Knowing Bass – a scientific approach to catching more fish” expands on this. It was used as a reference in a number of the carp magazines where anglers appeared to promote the use of coloured baits. Maybe it had something to do with the companies that sponsored them? Sorry that wouldn’t happen would it? No, I’m just a cynical old bar steward.

With boilies, no matter how bright they are, unless there is light to reflect off them,  fish will struggle to see what colour they are. In very murky waters and at night I suspect no colour will be detectable. I would suggest that colour is at its most visible in shallow, clear waters and perhaps this is where baits of this type will be most effective. I said earlier that I don’t use flouros. The only ones I have any experience of are the ones marketed by a well known national company. As well as being very bright they also have extremely high flavour levels and I suspect that this smell helps attract the fish – especially in murky waters and in the dark. If you were to put Squid and Octopus in any single hooker I suggest it would catch. The same could be said of Monster Crab, Tutti, Scopex etc.

An advantage of fluorescent colours is that they are likely to offer more contrast that a normal colour because they are brighter. I sometimes think we need to look at contrast rather than colour if we want a bait to stand out. To gain maximum contrast we need the foreground, (the bait), to reflect all light that hits it and the background, (the lakebed), to absorb all the light. When all light is reflected the object reflecting it appears white in colour. When all light is absorbed by an object it appears black. The above example gives a white on black scenario of maximum contrast. Conversely if the bait absorbed all the light and the lakebed reflected all light we would have a black bait on a white background which would also give maximum contrast. In practice this situation will never occur but we can strive to get close to it. What about a black hook bait in a bag of white bread crumb! I understand that to make flouros, as well as adding the fluorescent dye to the mix, a white dye also has to be added.

I haven’t used fluorescent, plastic corn or other particles although I have caught carp on bits of cork and foam. When I fish sweetcorn I usually use maize on the hair, especially with a fixed lead, as it is much tougher than corn in withstanding the attentions of small fish and therefore does not come off as often as sweetcorn will. I can see that plastic corn might be better but I am not sure what is to be gained by using different colours, unless it was to provide contrast. Black corn on a light lake bed would give a good contrast and possibly alert sight feeders. Personally I would like my hook bait to be as indistinguishable from my free offerings as possible. With regard to plastic tigers – well, aren’t natural tigers tough enough to stay on the hair?? I understand you can even buy plastic boilies these days. I wonder what the nutritional profile of these is like and what state the fish would be in if we all used them without any freebies.

I had taken young Benny to a local runs water. We were getting pick ups pretty regularly on a stinky, oily fishmeal. A youngish lad fishing on the other bank appeared to be struggling and after a while, came over and quite abruptly asked us what we were using for bait. Now I consider questions of such a personal nature to a complete stranger to be well out of order. It’s a bit like asking a woman her age or a poker player what he’s got in his hand. My stock answer is “Boilies”. The angler informed me that I ought to be on Alien Skins as they were emptying the place. I thought it sounded like some form of contraceptive and as Benny is only eight, I told the guy to bugger off. It turned out that they are a form of dip that you put your bait in to give it a coloured skin. Now why the hell would I want to put a coloured skin over my stinky, oily fishmeal in high summer? Especially when there are another five hundred identical ones around each hookbait! 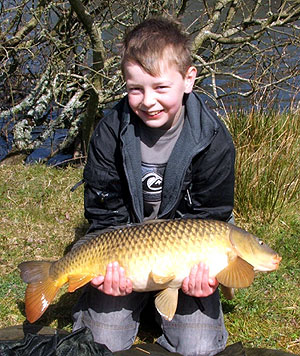 Another one to drab oily fish-meals

Baits that have their own light source are, if you’ll excuse the pun, a different kettle of fish. They don’t need to reflect light from the sun and while they may not be readily seen in very murky water I am sure they will come into their own  in clear water at night. Add a proven flavour and they will be even more effective. Assuming the colours of these baits have the same wavelengths as the same colours in the visible spectrum then red should be able to be seen from the greatest distance. The background would be black at night so perhaps a lighter colour will offer more of a contrast as the carp get closer to the bait. Any glow in the dark whites out there?

Now here’s a little puzzler to finish off with. I was talking about colour to young Tim at Future Bits. He told me that at a local match water, which is incredibly well stocked and hence incredibly coloured you often cannot get a take on a white maggot but you can haul on maggots which are dyed red. The same is often true on other waters. Now I know this water and it is coloured – very coloured. If you lobbed in a hundred watt bulb you wouldn’t see it a foot beneath the surface. These guys are fishing at depths of up to twelve feet. While red penetrates further than other colours in coloured water I suggest that in this lake it will make little difference – especially at ten feet. Because of the suspended particles and dissolved substances in the water no light will penetrate that deep so no colour will be visible. I am further confused as when we see something as white it is in fact reflecting all the colours of the visible spectrum so at a certain depth when all the other colours have been absorbed and scattered there will only be red light reflecting off it, the same as red maggots! Beyond that it is all black. I thought maybe there was something in the dye that was attracting the fish – then Tim told me it was toxic! I think a yellow dye that was used to colour maggots was also a bit iffy. I have no idea what is happening and neither will I pretend to.  I will make enquiries of match angling friends and get back to you!